Most voters have a friend that needs that little extra nudge to vote. By implementing an easy friend-to-friend voter turnout tactic called “vote tripling” using ThruText, you can nudge thousands of supporters to get those on the fence out to the polls.

Vote tripling is an optimized commit-to-vote pledge that involves two steps: (1) securing a supporter's promise to encourage three friends to vote and (2) following up with a timely text reminder to the supporter. The tactic is based on behavioral science research and has been validated by a rigorous study finding that it produces a statistically-significant increase in turnout for a fraction of the cost of other tactics.

Vote tripling is geared toward non-activists, the 97% of voters who will cast their ballot on election day don’t volunteer for campaigns. Reminding three close friends to vote is an easy, bite-sized task that non-activists are delighted to say yes to. This guide walks through how to collect vote tripling pledges using ThruText and how to send out reminder messages:

Follow the steps for Group creation. Use a naming convention to make identifying your vote-tripling list easy! Be sure to map VAN ids if you want to sync back your Vote Triplers.

Start building your vote-tripling campaign. Again, using a naming convention like, “Vote Tripling – Doe for Congress” will save you time later. For the description, use: “A reminder from a friend is the best way to get someone to vote. Ask your friends if we can count on them to get three friends to vote, collect their names for a personalized reminder text before Election Day!”

When writing your script we suggest, "Hey %FirstName%! It's %SenderFirstName% with [Candidate] for [Position]. A close friend's message is the best way to get someone to vote. Can I count on you to remind 3 friends?"

(Keep the character count low enough to stay in one single message! Remember, the variable names will be shorter in the real text.)

In a recommended reply, make the ask for their names:

In another recommended reply, make the thank you response:

Title the next reply “Thank you!” with the body, “Awesome! Thank you so much. You’ll be receiving a reminder to get these three to vote before Election Day!” 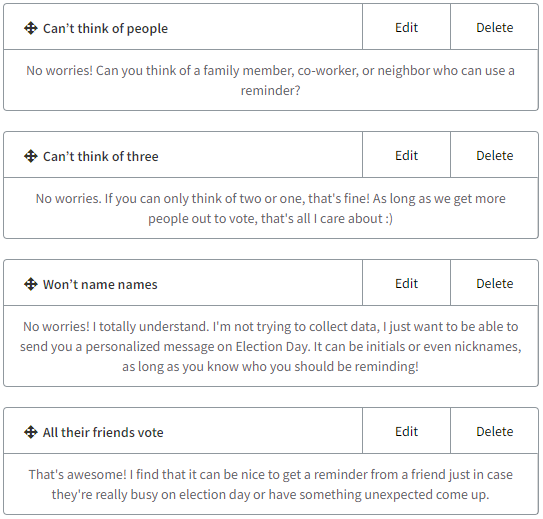 Create the Survey Question so that you can input the contact's three friends. Create a “Freeform” survey question and name it “Vote Tripler’s Friends Names”.

Create vote tripling activist code and others. We recommend activist codes to identify Vote Triplers, Wrong Numbers, and Republicans. (Import your survey questions if you would like to sync back to VAN.)

Step 3: Send out your messages

Text your supporters! Send all of your supporters and likely supporters the initial pledge SMS and, to everyone who responds positively, send them the recommended response asking for the first names of their three friends. Ensure that your texters are collecting survey data! 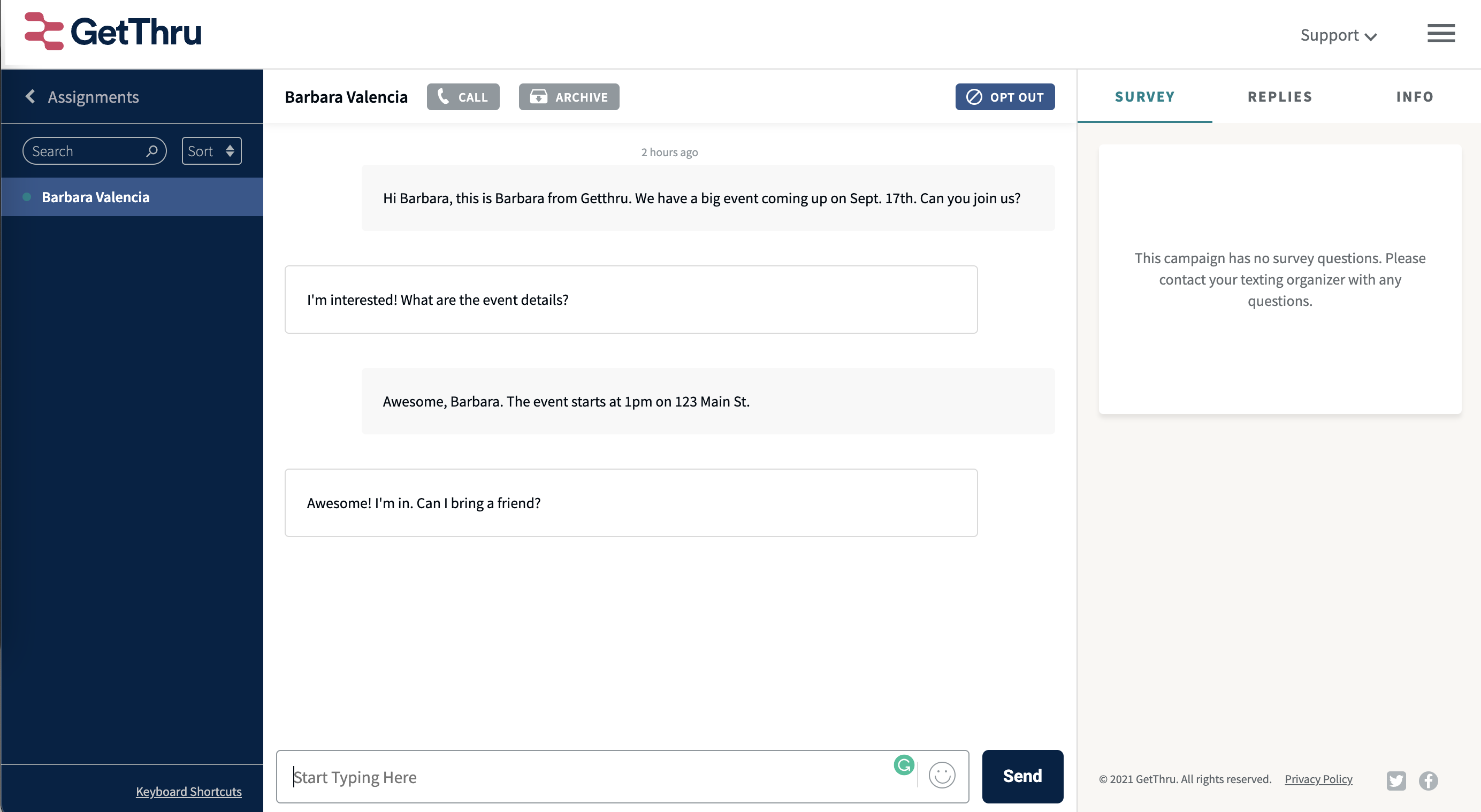 Export the survey responses. This CSV will contain the results from your survey questions. You will see who agreed to vote triple and the names that they provided.

If you want to bring the names of the Vote Tripler's friends, you will need to manually upload the names into the Notes section in VAN. 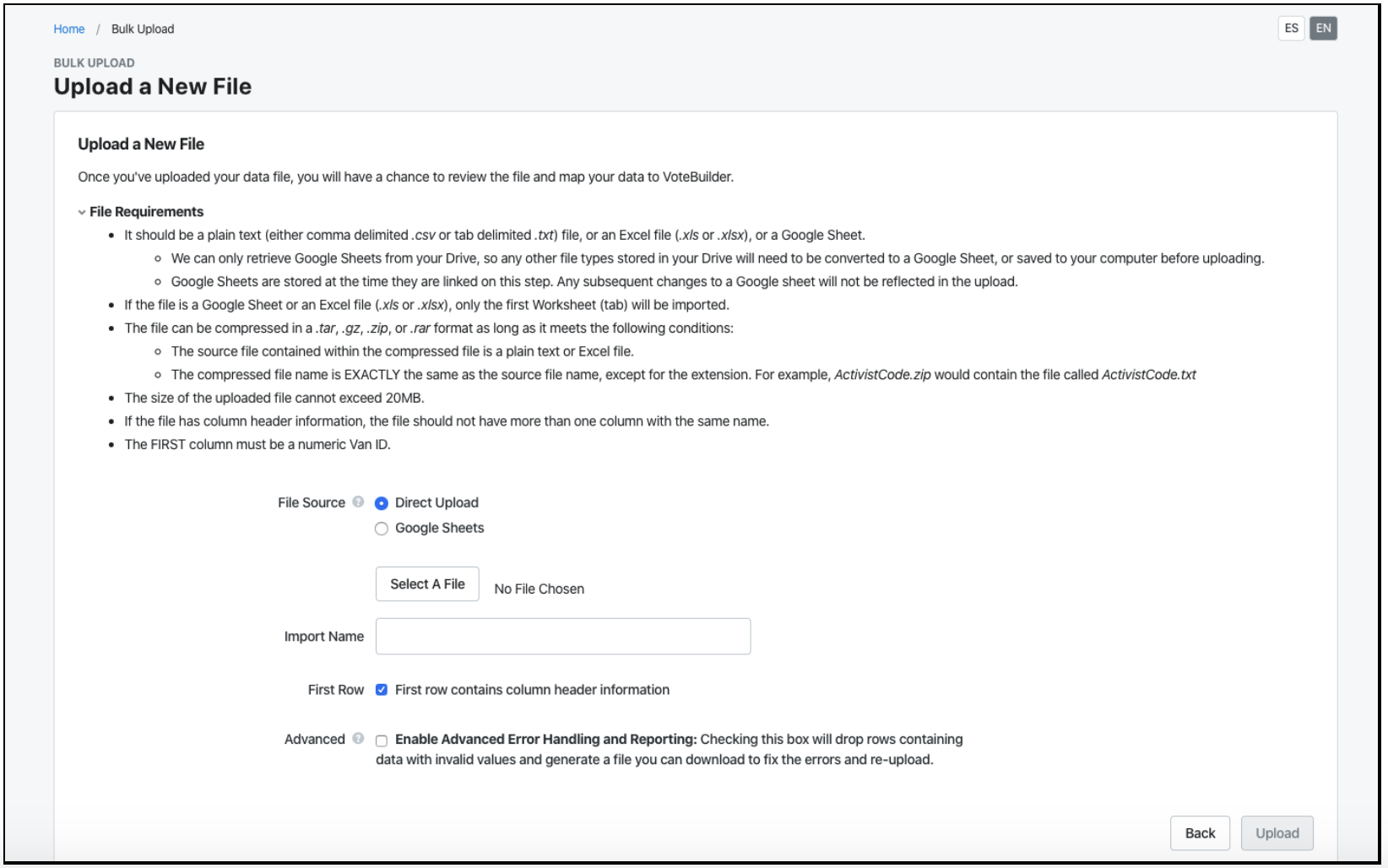 Before creating your next group, make sure you have created a custom field for "Vote Triplers' Friends' Names". Next, using your export from Step 4, create a new CSV with your respondents that includes a column for the "Names of Friends" as well as the three required fields.

Write your follow-up script. We recommend "Hi %FirstName%! It's %SenderFirstName% with [Candidate] for [Position]. Election Day is tomorrow! Right now, will you remind %CustomFieldCode% to vote!" 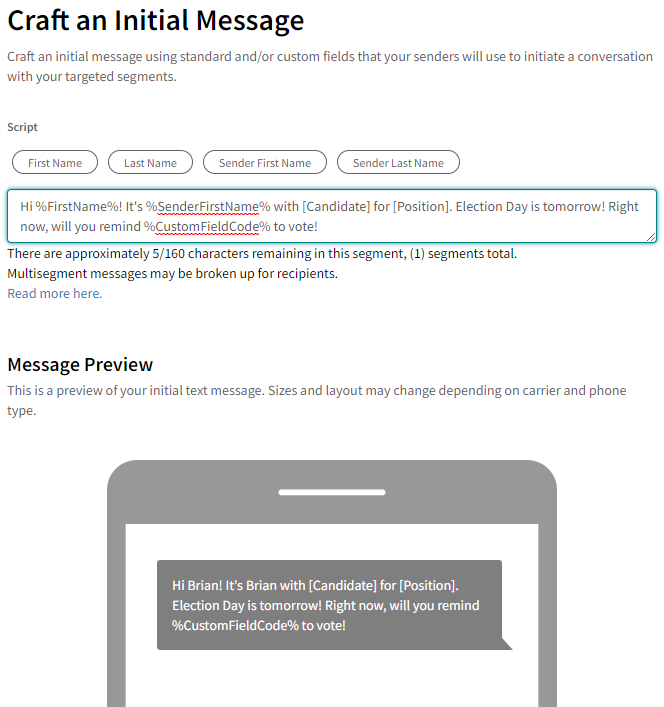 Encourage your contacts to get their three friends out to vote!